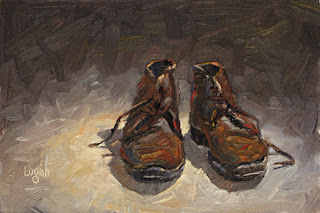 Yesterday, our small group met with our first standardized patients.  Like the woman who authored the essay I posted earlier this week, they are paid actors who come in to be examined as patients by nervous, inexperienced medical students.  This week's assignment was gentle, almost laughably so, and our "patients" were asked to go easy on us.  ("They told us to be nice to you - I guess this is your first time?" grunted one man at the end of the session.  He was clearly disappointed that he couldn't pull out one of his more savory characters this time.)  The actors were amazing and remained completely in character the entire time - it was difficult to believe that they were not actually the people they were pretending to be, with all the problems and history they gave us during the interviews.
As a group, we met with four patient/actors over the course of two hours, interviewing them in pairs in front of the rest of our peers and our faculty advisor.  The whole point of the assignment was just to get what is called the "chief complaint" - the main reason someone goes to see their doc - and to find out about the patient's situation.  Sounds easy, but you would be surprised at how hard it can be when you are suddenly on the spot.
Some people sat down with their patients and temporarily blanked on anything to say or ask.  We were trying so hard to remember everything we wanted to ask that it became impossible to retain any information from the interaction.  I do this all the time in normal social situations - when I meet someone for the first time, as soon as I have asked what his/her name is, I am already concentrating on my follow-up question and don't even hear the answer.  I say that I have a bad memory for names, but really, it's probably that I just don't listen in the first place.
The patient that my partner and I interviewed was a 61-year-old man who came in with a wracking cough accompanied by chest pain.  As we talked to him, his story began to come out: he had been basically healthy all his life, but he had suffered a nasty divorce, and had lost his job as a consequence of his work performance diving during this period.  He eventually became homeless and he was estranged from his family and all his friends.  He told us that most of his friends stayed away because he figured they were afraid he would ask them for money, and of those who initially stayed around, he had made the mistake of asking for money, and drove them away too.  He came to know his way around the shelter system, and was in a good one now.  He told us he really enjoyed walking for miles and exploring the city.
Every detail about this patient was perfect: his clothing was clean but worn and frayed; his shoes had holes in them.  His hair was slightly shaggy and uncombed.  He carried a big brown bag with him that held the majority of his belongings.  He was in decent spirits, except for the cough - he was not depressed, but he didn't smile, either.  His cough actually sounded painful, and every time he coughed, he pressed his fingers to his breastbone and winced.
I was feeling pretty good about my patient interview when my partner and I finished - no blanking!  No stumbling!  No repeating the same question more than once!  (Amazing how what should be a relatively simple social interaction can give you such a sense of accomplishment.)  And our patient started out his critique by praising our interviewing skills and telling us we had done an exemplary job.  This was awesome.  But then he dropped the bad news - while we were terrific working as a tag-team, we will never be in that sort of setup in real life.  In an actual clinic, we will be all alone, one-on-one with another person.  A lot scarier, and a lot harder.
I know that this person was not actually who he was pretending to be, and I know that this was not his real story, but he still moved me.  I found myself wishing I could really help him, and I wanted to be able to do something about his terrible cough.  As this actor pointed out to us in his feedback, this is the whole point, and what can make these exercises an effective experience.  No, the situation is not real, but as professional actors, they get into character by believing that it is, and as doctors-in-training, we need to have the same level of seriousness in order to learn from it. 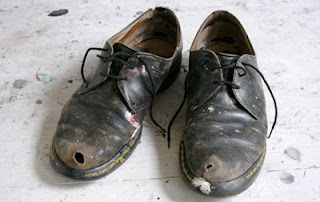 PS. Here is an article in yesterday's New York Times about changing medical school curriculums and efforts to integrate more direct patient contact/care into the early years of training: Meeting Patients on Day 1.