In a couple of weeks, we will be sent out to primary care sites all over the city to learn from a physician one afternoon every other week for the next year and a half.  In preparation for our OPEX (OutPatient EXperience) assignments, we have been learning the physical exam piece by piece.  We are being tested tomorrow and Thursday on our physical exam skills.  Not so much on whether we know what we are looking, listening or feeling for, or even really whether we can do these things correctly, but whether or not we can remember all the things one is supposed to do during a physical exam.
This morning’s New York Times had a really interesting article about the physical exam and about Dr. Verghese, one of its huge proponents as a critical tool for the diagnostician. 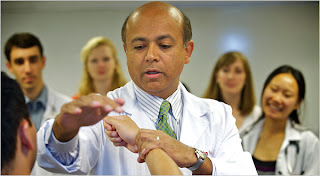