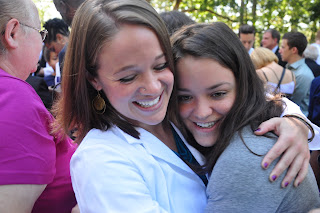 With the completion of my final neuroscience examination, I expected to experience a feeling of relief. It was the last exam of my first year of medical school. I dreamed of finally being able to relax from the academic rigors and responsibilities that notoriously define one's first year as a medical student. That sigh of relief did not come readily. As I made my way out of the building I decided to pass through the medical library. There, my second-year colleagues were engrossed in preparing for their Step 1 boards. I swallowed deeply with the realization that this would be my last summer of freedom. Still, I had hopes that this summer break would allow me to regroup and spend more time with my wife Riki and our 2-year-old son Yehuda. I also had hopes that I might steal some time to write about some of my experiences of the past year.