In Honor of Starting the Cardiology Module 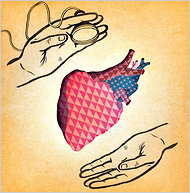 One by one, the medical students bent down to listen to my heart.

There were six of them, led by a bright-eyed physician with a charming Irish accent — so charming I almost didn’t care that he never called me by name. All told, 18 second-year Harvard medical students would listen to me on this darkening winter afternoon, each group of six overseen by a different cardiologist.
“Place the diaphragm of your stethoscope here,” the Irish doctor was saying. “Start at the base of the heart and move down to the apex.”
He listened quietly. “Ma’am, take a breath in, and breathe out and hold it.”


I felt like an oddly invisible prop: part artist’s model, part one-night stand, heard but not seen. At first nobody made eye contact or spoke to me, a situation that evoked the universal vulnerability of patients: exposed, invisible, dehumanized.
Amplified through a stethoscope, the human heartbeat sounds like the muffled cadences of a marching band. Thuh-rhumm. Thuh-rhumm: A low washboard rumble, signifying a poorly functioning ventricle. Thhrrum-BUM. Thhrrum-BUM: A diastolic murmur, with its bass-drum finale. PAH-da-da-PAH. PAH-da-da-PAH: The crisp roll of aortic stenosis. Flutters, skips, thunks, whooshes, crescendos, decrescendos, telltale pitches and tempos — each conveys a diagnostic meaning.
Indeed, it was my “click” that had brought me to this class in the first place. The click is a prime feature of mitral valve prolapse, a generally benign condition in which the valve separating the upper and lower chambers of the left side of the heart doesn’t close properly.
During my annual physical, my doctor at Massachusetts General Hospital had remarked how loud and distinct my click was. Would I consider volunteering as a “patient,” so fledgling medical students could listen and learn?
I was intrigued by the chance to gain perspective on the doctor-patient interaction. Make that “Patient-Doctor II,” the intentionally reversed name of this second-year course that focuses on learning the physical examination.
Now, as I sat in an open-stringed green-and-blue-print cloth gown, I began to wonder if the students realized they were examining a live human being, as opposed to a particularly sophisticated anatomical model.
The fourth student who strode to my chair was a guy I remembered from a cardiology lecture I’d attended at the outset, taught by Dr. Katharine Treadway. He’d sat up front and answered her toughest questions, brimming with enthusiasm and brains. I had found myself rooting for his medical career. Now he listened, smiled at me and said, “Awesome!”
That broke the ice. At last I was a person, not a prop.


The next student opened with “Hi, how are you?” When she finished, she said, “Thank you very much!”


In this class “listening” had more than one meaning, as Dr. Treadway had illustrated with a cautionary tale. About 10 years earlier a woman agreed to let students hear her heartbeat. She had an advanced condition called severe mitral regurgitation and needed a valve replacement.
One student examined her, removed the stethoscope and blurted to the instructor, “How can she live if her heart is this bad?”
“This was a student who is not uncaring or unkind,” Dr. Treadway told the class. “But in that moment she did something all of us do all the time: she was so engaged with the problem that she forgot about the person who had the problem.”
As students master the intricacies of the physical exam, “the experience of that patient’s illness will be completely invisible to you, unless you consciously look for it,” she warned, adding: “At the end of every interview, say to the patient, ‘How has it been for you, being in the hospital?’ I want to bring you back to the patient.”
Now the Irish physician’s group departed, and the second group trundled in. This doctor introduced me right away. He had an easy and personable way about him, and I admired his arty cuff links.