How Do YOU Want to Be Treated?

So important; so misunderstood... how to handle end-of-life-care.  This subject is easily among the top items on my list of Things That Seriously Get Under My Skin.  Earlier this year, I posted a long but excellent essay by Atul Gawande about this same topic here.
In my experience shadowing palliative care doctors, learning about end-of-life issues in med school, and having conversations with friends and family members who have experience with hospice, I can't help but raise a skeptical eyebrow at two of the quoted doctors in this article, as well as others who share their opinion that any legislation aimed at addressing the obvious deficits in thoughtful, informed-decision-based care of patients and their loved ones during a very hard time is somehow overstepping its bounds and "telling people how to die."
Research shows that, across the board, both palliative care and hospice increase quality of life, increase quality of care, increase satisfaction of patients, their caregivers, and their healthcare providers, lead to fewer invasive procedures and lower usage of medications, and even prolong life when patients are informed about and given the chance to utilize these options.
I think that part of the problem of how we deal (or, more accurately, don't deal) with these issues lies with the failure of most medical schools and residency programs to provide any training in these areas, leaving most doctors without the necessary tools to feel confident that they can provide meaningful care to their patients in any way other than trying all possible interventions to keep them alive as long as possible.  But I also think that a large part of the blame for our lack of compassionate end-of-life care lies with the toxic political discourse that has been perpetuated in this country about this subject.  Politicians pursuing personal gain have manipulated the public understanding of this critical aspect of healthcare to score cheap points by throwing around terms like "death panels."
This robs both patients and their physicians of the opportunity to have straightforward, honest and caring conversations with accurate information about end of life options; conversations that would empower patients and their families to think about and actively choose what is best for them.  The earlier these conversations can be started, the more choice patients can actually have.  For all the conflated fears of legislated death panels and someone else choosing whether you live or die, the way to have the least control over how you die is to never talk about it with your physician and your family.  If you have not clearly stated your wishes and if you and your family have not been informed of the options available, the more likely it is that you will suffer extreme medical interventions to keep your body alive, even if it wasn't your wish.  The more likely it is that radical resuscitation, intubation, sedation, and analgesics will be used.  The more likely it is that your loved ones will have to make anguished decisions about your care without explicit directives from you, and the more likely that they themselves will suffer guilt and depression.
Let me be clear: I am not advocating that people chose minimal medical intervention and that the best way to go is to just accept death.  I would never say that to anyone; I don't even know if that is what I want for myself.  But what I am advocating, and what I wish for all of my loved ones, is the right to have open, honest and informed conversation with one's physician about a realistic prognosis, all treatment and other care options available, and the drawbacks and benefits of each, so that one can truly decide and control, to the extent possible, the end-of-life care option that best honors one's wishes in accordance with one's values.
This article is from today's New York Times: 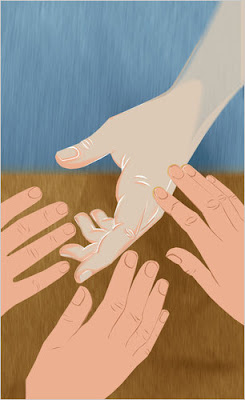