This morning I got the following email in my inbox. Not to mass-spam all of you who read this, but as Haiti is a cause near and dear to my heart, I wanted to share the update about the worsening cholera crisis going on there.

As you may be aware, a second wave of cholera is battering Haiti. What you may not know is just how severe it is. The numbers are dramatic:

In April, the cholera clinics we support treated 3,932 patients.
In June, these same clinics treated 14,425 patients.

The reason for this spike is simple. Flash floods—a side effect of the rainy season, deforestation, and decades of ineffective foreign aid—have spread the disease among water sources. In the absence of water and sanitation systems, or in many cases even basic latrines, cholera runs unchecked.

Faced with a crisis that strains their capacity to the breaking point, the staff of Zanmi Lasante, Partners In Health’s Haitian sister organization, continue to demonstrate astounding stamina and strength. In a recent message (posted below), Dr. Louise Ivers, who has long helped lead our efforts in Haiti, underscores the urgency.

Today, I’m writing to ask for your help in raising public awareness of this crisis.
PIH/ZL cannot end the cholera epidemic alone. But with your help we can ensure that Haiti stays in the hearts and minds of the United Nations officials, international donors, and the millions of Americans who donated following the January 12, 2010 earthquake.

Learn more about cholera in Haiti and how it can be stopped:
http://act.pih.org/choleraupdate 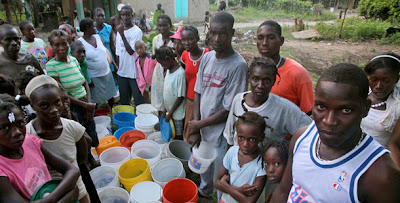 Posted on 07/19/11
Dr. Louise Ivers is PIH's Senior Health and Policy Advisor. She has been an integral part of Partners In Health and Zanmi Lasante's leadership team in Haiti for nearly a decade.

Early one morning in October 2010, the senior Zanmi Lasante team met in Mirebalais. Ophelia Dahl, our executive director, traveled from Boston to convene a meeting and everyone was there. Things felt like they had begun to stabilize since our lives had been turned upside down by the earthquake the previous January. So much of the first half of the year had been spent responding to the crisis while trying to keep our usual activities in Haiti going – the team was tired, but mostly there was a feeling that we had achieved our new rhythm of work. With new activities in Port-au-Prince, plans for a rehabilitation center and a residency program in St Marc, mental health care activities scaling up, and a training hospital under construction in Mirebalais, the new ZL pace was hectic but everyone’s spirits were optimistic.
I received a call from one of our colleagues to say that he would be late to the meeting – 100 people suffering from diarrhea arrived at St Marc Hospital overnight, and he was going there first to investigate. Arriving an hour into the meeting, he passed a note to ZL’s medical director and me expressing his concern. We feared what would soon be confirmed: cholera had arrived in Haiti.
From that moment – and for the next three months – we returned to crisis mode, with the often-overwhelming task of trying to provide excellent care for the patients arriving at our facilities and in the surrounding communities. Once again, the PIH/ZL teams kicked into overdrive with teams working night and day. Alerts came through by email, text message and phone from all over the Central and Artibonite departments asking for help. Our medical teams walked upwards of six hours at times to set up oral rehydration posts in distant villages, only to hear that cholera had spread another three-hour walk farther up the mountain.
One saving grace in the early phases of the cholera outbreak in Haiti was that there were many partners to work with and PIH/ZL relied heavily on partnerships wherever we could – with other international non-governmental organizations (NGOs) and the Ministry of Health, whose work we support on a daily basis. Working with other organizations can be challenging and this crisis was no exception, but there was no doubt that we needed this level of support and collaboration. Health coordination meetings at that time were chaotic as many partners cramped into an overcrowded room in St Marc to yell out what they would do or were doing.
A striking difference now as the epidemic has once again spiked is that many of these partners are no longer working in the Central or Artibonite departments. Citing lack of funds for cholera activities, they have downsized, disappeared, or retreated, handing off their activities ‘to the government.’ In these departments, where the health budget is miniscule, this largely means handing off activities to Zanmi Lasante. This has made the second peak of the epidemic all the more challenging and stressful on our staff and our resources.
The Mirebalais cholera treatment center saw five times as many patients in June as in May. Alerts are the norm again – with emails and text messages reporting areas with minimal access to services suffering from high numbers of cases. Zanmi Lasante’s community teams are on high alert – spending hours on foot to reach difficult, isolated places, providing oral rehydration solution, training community health workers, distributing water purification tablets, disinfecting houses – but it is never enough. The cholera treatment centers were overwhelmed last month and although staff are dedicated, hardworking and committed, it is never enough. Once again, Zanmi Lasante is back in crisis mode, doing whatever we can to address the issues at hand, but it is never enough.
Since last year, we’ve been advocating to use all of the possible tools against cholera in a complementary and comprehensive way to reduce deaths and to minimize the impact of the disease. In places where the water and sanitation situation is dire, where plans to provide a safe public water system do not exist, it’s hard to imagine that cholera will ‘burn out’ in Haiti soon.
We are delighted that our proposal, in collaboration with GHESKIO (a Haitian, Port-au-Prince based NGO), to pilot the use of cholera vaccine in Haiti was supported last week by the Pan American Health Organization. Now we have to set about securing doses of the vaccine and implementing the project with the Haitian government. We hope that, while focusing still on the fundamental cause of the cholera epidemic, which is lack of clean water and sanitation, we can make some progress and save some lives with the complementary use of another tool in the armamentarium.
Visit PIH/ZL's cholera update page.