How Much Does it Cost to Make a Doctor?

Well, this is depressing... 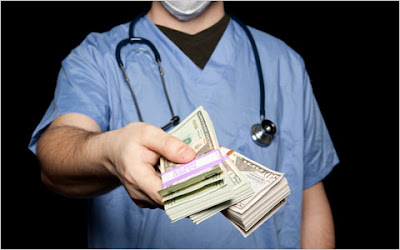 By PAULINE W. CHEN, M.D.
He was a senior surgeon many of us in training wanted to emulate — smart, busy and beloved by patients and staff. But we loved him most because he could have been any one of us. He had slogged through the same training program some 15 years earlier, and he had survived.
I caught up with him one afternoon during my internship, hoping to glean some wisdom, but all he could talk about was how he was going to be seeing patients less and focusing on his dream of improving hospital quality and efficiency. “Don’t get me wrong,” he said. “I love caring for patients.” But the stress of keeping a practice afloat was wearing him down.
“Plus the monkey is finally off my back now,” he said with an enormous grin. “I paid off my last student loan.”
My heart dropped. That the specter of student loan payments would loom over my life for at least another decade and a half was utterly disheartening.
But absolutely true. It wasn’t until my early 40s that I paid off my last loan.
For almost three generations, debt has been a nearly inescapable part of becoming a doctor. Over 80 percent of each medical student class will graduate in debt; and while that percentage has remained unchanged for 25 years, the increase in the total amount owed has leapfrogged over all other economic reality checks, like inflation and the consumer price index. According to the Association of American Medical Colleges, which has been trying to address the problem for nearly a decade, young doctors who graduated from medical school last year had an average debt of $158,000, or $2.3 billion for the group as a whole. Almost a third of students owed more than $200,000, a number that will only increase with the addition of interest over payback periods of 25 to 30 years.
The skyrocketing costs are primarily due to the expansion and increasing complexity of universities and academic medical centers, and to the trend among university administrators to use tuition to support institutional projects that may be only indirectly linked to medical student education.
But while upgraded clinical facilities and spectacular research programs are obvious reasons, another key factor has gone largely unnoticed. It is our society’s assumption that individual indebtedness is required to obtain big-ticket items, whether they are cars, houses or higher education.
“It’s become normal now to take out loans to get anything of value,” said Dr. S. Ryan Greysen, an assistant professor of medicine at the University of California, San Francisco, and lead author of a fascinating study published this month on the historical and social factors that have contributed to rising medical student indebtedness. “Getting a medical education has become similar to getting a mortgage on your house.”
The acceptance of student indebtedness as the “norm” of medical school has provided a kind of carte blanche for robust tuition increases. Median yearly tuition at public medical schools is $29,000, and at private institutions it is $47,000 — increases from two decades earlier of over 312 percent and 165 percent, respectively. While some may counter that future doctors can well afford such increases and loans, the rising debt load has had and will have repercussions on patients, particularly those in greatest need.
Paying so much up front has transformed an education that was once a path to public service into a significant financial investment that needs to yield returns. “Because of all the debt, people stop thinking of medicine as an incredible opportunity to do good,” Dr. Greysen said. For some young people, looming debts mean eschewing a calling to serve a particularly needy, less lucrative patient population or practice, and instead pursuing a well-compensated subspecialty that caters to the comfortably insured.
For others, such large debts mean forgoing a medical career altogether. Cost remains a key deterrent for pre-medical students and is an important reason there aren’t more African-American, Hispanic and Native American doctors. Despite the well-documented benefits of a diverse physician work force, these economic pressures are transforming the socioeconomic makeup of medical school classes; medical students are increasingly from affluent backgrounds. In 1971, almost 30 percent of medical students came from households with incomes in the lowest 40th percentile, but only 10 percent of all medical students now do, and more than half come from families in the top quintile.
The acceptance of debt as a prerequisite of medical education has obscured even the most basic fact: It’s unclear just how many dollars it takes to educate a medical student. Because we accept debt, few university administrators have ever been held accountable for the tuition charged. And costs vary wildly among medical schools even within the same state, with one institution charging as much as three times what another charges for tuition and fees.
But medical students and the general public are not the only ones who are in the dark. Medical student dollars have become so enmeshed in supporting the diverse endeavors of a university or academic medical center that it’s become difficult even for those who set the prices to know what exactly they are charging for.
Over the last few years, some medical schools and educators have tried to address the problem. A few have tried to elicit alumni donations to support medical students, freeze costs or even do away with tuition altogether. Others have suggested highly innovative solutions that would strategically leverage the debt so that those medical students who went into high-need, less remunerative specialties would have less (or nothing) to pay.
But few of those changes will have any significant or long-lasting effect until we disengage ourselves from the notion that debt is a necessary part of medical education. As long as indebtedness is viewed as a normal part of becoming a doctor, tuition will continue to surge unchecked, and the implications for patients will only multiply. And we will be no closer to an answer for the most important question of all: Just how much should students, and society, pay for the next generation of doctors?