I have had this paper lamp sitting on my dresser for like a year and half now.  I thought it was kind of cute when I bought it at Ikea, but I didn't really ever use it because I didn't like the way it looked when it was actually turned on.  It's one of those Ikea lamps that you have to buy their special little Swedish lightbulbs for because no other one will fit.  And the special little Ikea lightbulb is one of those low-energy ones that is all fluorescent white light, and sometimes that is fine, but it is not a warm light at all, and not what I wanted for a cute little lamp on my dresser.

I forget how or why it occurred to me that I should watercolor it, but pretty much the minute I had the idea, I got all excited about it and found an excuse to make a run to CVS and get supplies for my project.


I found these super cheap watercolors with lots of pretty shades (ok, they were the only ones in the store) - they were about $3.50, which I was pretty excited about, and I even bought extra paintbrushes. Apparently I was feeling very ambitious about this little artsy outing.

So I sat down and realized that it had probably been, oh, I don't know, maybe 15 years since I had ever even used watercolors?  It all came back slowly... right, I need a cup of water, probably should get a paper towel or two... 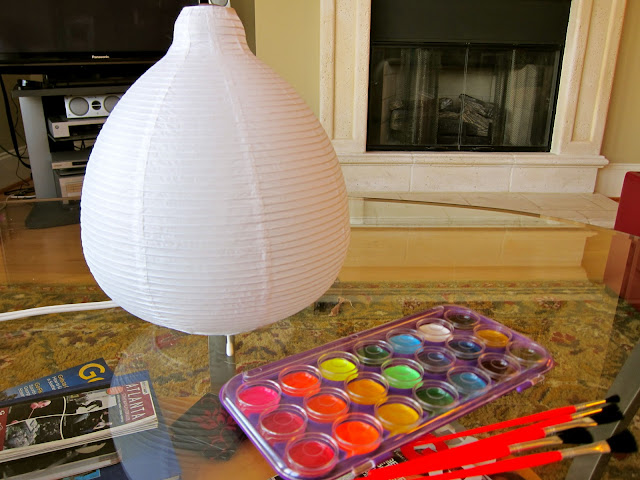 Then, disaster.  The paint just did not look right to me... I added a little water and mixed and mixed, but the colors never got rich or thick, and instead of coloring the paper lamp, it just made it wet.  I thought maybe I should try to score the paint to let the water get deeper down in there, and maybe that would help produce a thicker color, but instead it turned out to just get gooey.  And it still didn't leave more color on the lamp.


I even tried smearing the globs of goo onto the lamp and rubbing them around to get some color to stick onto the paper, but it was a total fail.

Enough fooling around with the $3 piece of junk watercolors.  I needed CRAYOLA.

Take Two.
I didn't get around to shopping for more watercolors until a week later.  We were on a trip to that magical and dangerous land, Target.  FOR SURE Target will have Crayola watercolors, right??

NOPE.  In the "art supply" aisle, literally everything is Crayola.  Crayons, colored pencils, chalk, scissors, coloring books.  Everything.  Except for the watercolors.  They only had one kind, and they were Rose Art.  These ones cost about the same amount the first ones did, so I was pro-actively pissed about this second round of crappy watercolors and how they probably weren't going to work, either.

Yay!  This time, the watercolors turned out to behave like I remembered them to. 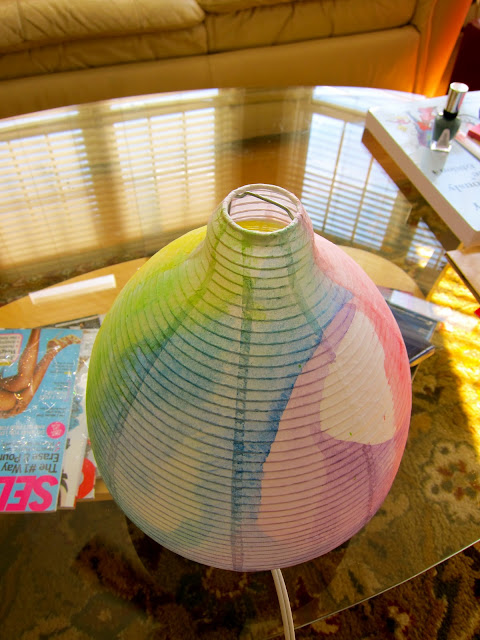 Voila!  Finished product.  Or mostly finished, I can't decide.  I might add more layers in places and fill in a little white that is still peeking out.  Either way, much better than it was originally... the color makes me happy. 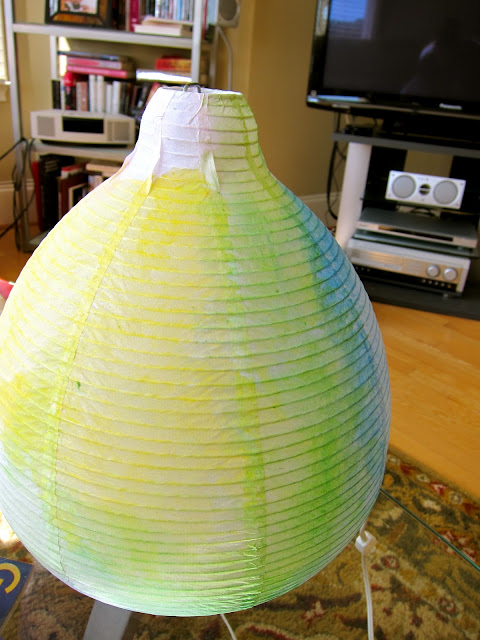 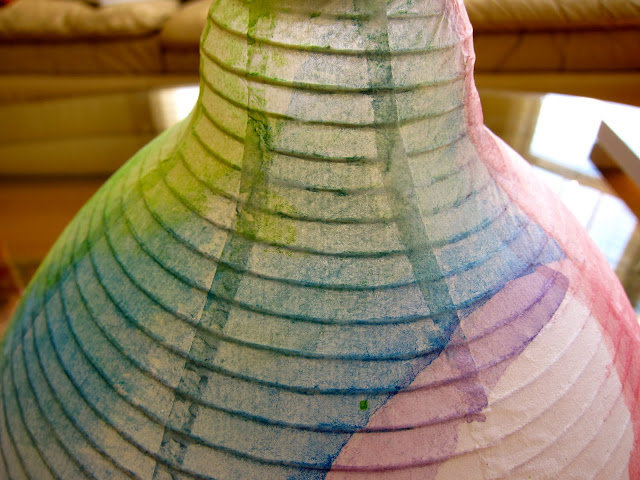 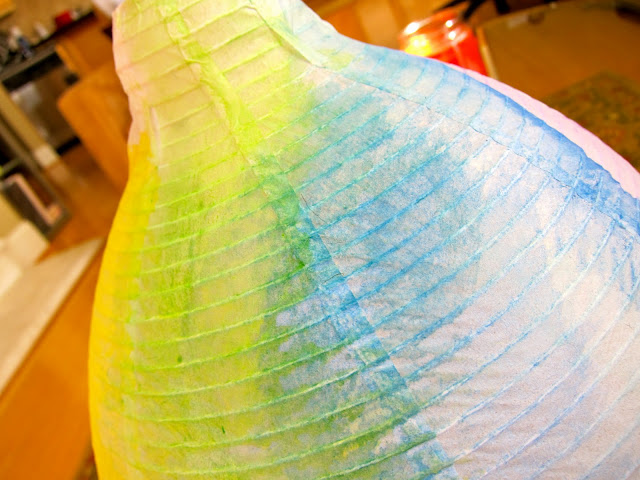 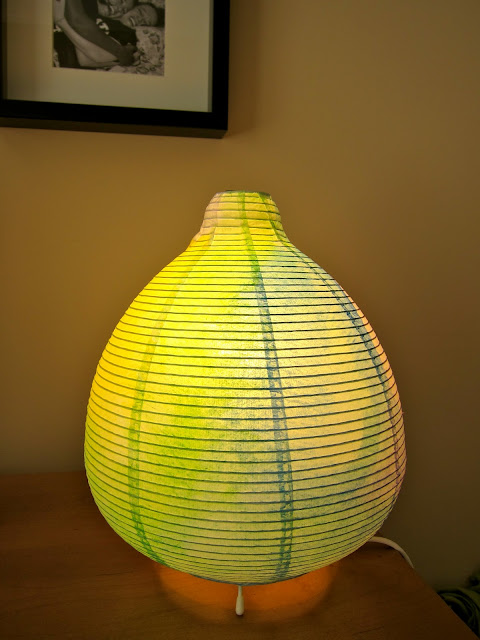 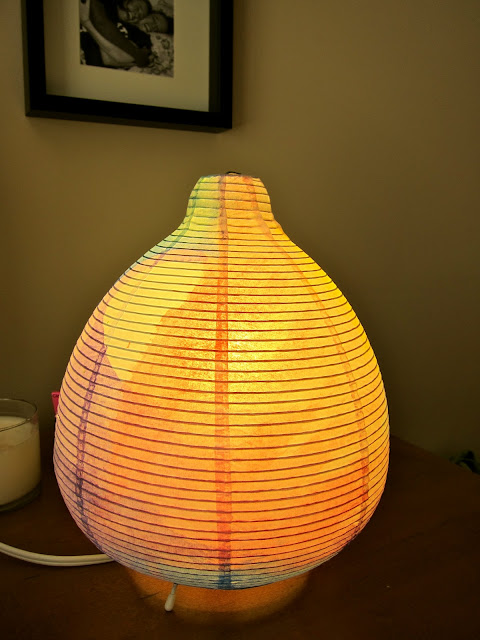 ~~~~~~~~~~~~~~~
As you can probably tell from my last few posts, I AM SO OVER SCHOOL.  There, I said it.  I don't like school.  I wish I did.  I really, really, really want to like it.  I want to love it!  But I hate getting up that early for the first lecture, I hate sitting in that giant lecture hall and I hate the crapshoot that is the wildly varying degrees of just-okay to downright-awful of our lecturers' talent for teaching.  I REALLY hate powerpoint.


And right now I am doing that thing where I have so much to do and so little time to do it, and I am freaking. out. about it and actually not doing a thing other than maniacally checking email and facebook and every blog I've ever read every .8 seconds.  This is the worst feeling.


Our neuro II exam is a week from today.  Just gotta make it through the next seven days....