So.  I wanted to make Muddy Buddies for a delicious study snack.  And I wanted to make them with Nutella.  Sounds amazing, right?  So I looked up a recipe, and modified it a little to use Nutella instead of most of the peanut butter.

If you had been there, you would have thought it was my first time attempting to prepare food.  I mean, it has been a while (Trader Joe's frozen entrees are literally keeping me alive these days), but still -- I'd like to think that I am at least semi-competent in the kitchen.  This was a total disaster.

If you have ever read a bottle of Nutella as thoroughly as I have, you know that there is a statement about not microwaving it.  I think I now know why.

Following the directions, I put the chocolate, butter, peanut butter and Nutella in the microwave to melt them all together.  The box of Rice Chex was a little more than the recipe called for, but I figured it was a close enough approximation, so I used the whole thing.  Got my mixture out of the microwave, stirred until it was smooth (it was sort of thick but I just went with it), poured it over the cereal, and then, following advice I read somewhere about this mixing best with your hands, I shoved both my hands into the mixture and proceeded to try to stir everything around.

The bowl I had used was definitely not big enough.  Cereal was spilling everywhere.  My chocolatey mixture was clumpy and not evenly coating the pieces.  Even if it had been smooth and easy to stir, there was not enough of it for all the cereal.  And now both my hands were totally covered with it.

Crap.  This is not going well.

So I licked off my fingers of one hand to melt a little more chocolate and a little more peanut butter and add it to the mix.  It began to stir a little better, although it was still getting everywhere.  Close enough, I figured.

I scooped half of it into a ziplock bag, poured half the powdered sugar in it, and proceeded to try to shake it up with my one clean hand.  The zipper broke open and powdered sugar flew everywhere.

At this point I realized that I didn't have a clean bowl to put the sugar-coated pieces in, so I had to grab a whole stack of bowls from under the counter with my one hand and get the biggest one from the bottom.

Izzy was hovering around my feet this whole time, begging me for some and barking at me when I didn't give her any.

I found another ziplock bag and tried again with the second half of the mix and the rest of the powdered sugar. This time, I washed my hands off and used both of them. Much better.

Anyway, the whole fiasco ended with Muddy Buddies that at least approximate how they are supposed to turn out.  Lots of cereal pieces lumped and clumped together, but those are the bits I like best anyway. 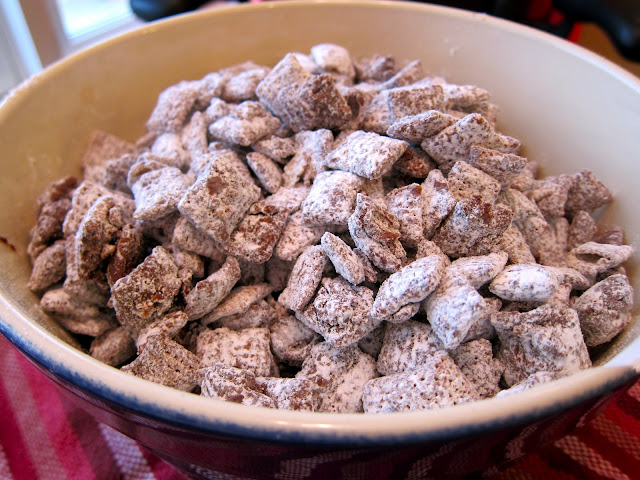 On second thought, definitely not a fail after all. :)

Also, because this is hilarious (but almost not because it is SO accurate), and because my awesome friend Tommy makes a cameo appearance in it, you must watch this video:


There are about four or five of these "shit med students say" parodies on YouTube, and this one is by far the best, and I'm not just saying that because I know someone in it.  Enjoy!