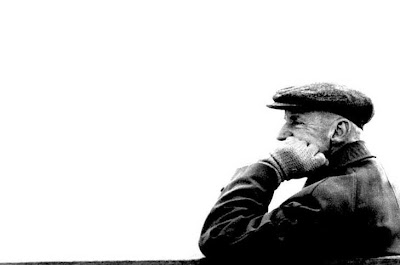 There was lots going on... I have been sick, I was PMS-ing, I am apartment hunting and very behind in my studying and feeling very overwhelmed about both of those things and about life in general... anyway, like I said, just lots going on.  Lots of reasons for my feeling extra emotional.

But then I got to palliative care, and first of all, all the doctors and NPs on the service are awesome.  Like, really awesome and amazing people.  And the work that they do is just incredible... they give the kind of care that I think about 90% of people who want to be doctors think they want to give (until they get to medical school, and then internship, and then residency, and then fellowship, and then by the time they are finally practicing on their own and earning more than a public school teacher's salary, all of those ideals are long since gone and they have become bitter people with inflated senses of self-importance and discussions about "best patient care" have become relics of a distant past... I digress.)

Then I got to palliative care, and it was all I could do to not have to run sprinting from every patient encounter, bawling.

Palliative care docs really take care of people.  And not just patients--they take care of their patients and they take care of their patients' families and friends.  They support the support system.  "Palliative care" means best supportive care; contrary to common belief, it encompasses hospice care but it is not the same as hospice.  It is not just end-of-life care--there is a lot more to it than that.  Yes, it often comes into the picture near the end of a patient's life, but it is not limited to it.

Palliative care providers focus on caring for the whole patient, including their medical, physical, emotional, and spiritual needs.  Palliative care teams frequently help with pain management; what is unique about their approach, though, is their implicit recognition that pain does not exist solely on the physical level.  Palliative care will help to manage pain from all its myriad sources, whether from metastatic cancer or from broken relationships.  Quite often, this involves simply listening.  Just sitting with a patient, or the patient's daughter, or the patient's brother, or the patient's entire extended family.  And really listening.  And it is truly powerful, what that one act can accomplish.  It can be a healing act.

There is an art to this act, and it is one that the providers I worked with last week had down beautifully.  I sat with them as they broke bad news to patients and their families, reviewed pain medication regimens, gently emphasized that it was now time to start planning for a move to hospice, tactfully facilitated meetings about living wills and code status and DNR orders, compassionately counseled struggling children of critically ill ICU patients.

And I could not help it--during those meetings, I would start to think, what if this were my mother on this ventilator?  What if this were me and my siblings, discussing my father's care?  What if it were me having to make these decisions?

I repeatedly had to do the thing where you suddenly focus very intensely on something on the floor and you force yourself to think about how your shoes are pinching your toes, or baseball, or the parking ticket you just got, or the laundry that you need to do when you get home, and you blink furiously to keep the stinging in your eyes from leaking all the way out.  It took every ounce of concentration I had not to burst into tears multiple times.

I found myself at home at the end of those days, really needing to de-brief with my friends and my classmates.  I couldn't even tell some of the stories from the week without breaking down.  Even now, as I type this, I can feel the knot rising in my throat.  It was a powerful and touching week... and even though I absolutely loved the experience, I am not sure that I have it in me to do that kind of work day in and day out.  I am not sure that I know how to tread the line well enough between being destroyed by the everyday tragedies that surround you in that setting and just becoming hard and unfeeling, shutting it all out.

I recently read about a program designed to do just that--to help physicians navigate that emotional in-between.  I think the idea sounds amazing, and I am even more excited because Emory happens to be one of the institutions joining up to implement it this year. 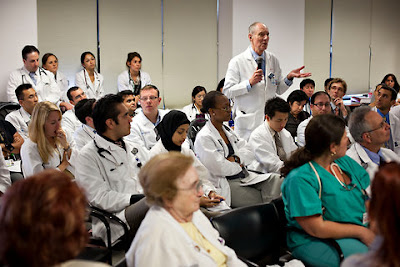 Sharing the Stresses of Being a Doctor

One afternoon, a doctor friend whose clinical skills and bedside manner I’ve long admired called wanting desperately to talk about her day. Exasperated, and feeling as if she had no one to turn to at work, she reached out to me, her friend.

Earlier that day, a transplant patient had threatened to stop taking one of his medications. Proud of his looks, he had become despondent when the drug made his gums swell. “He thought he looked like a freak,” my friend said.

But he needed the drug to keep his body from rejecting the transplanted organ, so my friend tried to reason with him. When that didn’t work, she began bargaining, then pleading and cajoling. The more he refused, the more frustrated she got. To her, swollen gums seemed like a small price to pay for a lifesaving transplant, and she found herself growing increasingly angry with the patient.

“All those ideals about empathizing with patients and respecting their choices went flying right out the window,” she said. She had thought about asking a colleague at work for advice but feared she would be judged, even blamed. “Everyone is ready to tell us to be caring and compassionate, but it’s really hard sometimes, trying to do to the right thing all alone.”

Studies have shown that health care that respects patient values and preferences influences how well patients do. Statistics show that such compassionate care can improve control of diabetes, increase patient adherence to treatment recommendations, decrease the use of costly diagnostic testing and lower hospitalization readmission rates for ailments like heart attacks and pneumonia.

But the mounting evidence has also led to a flood of new mandates, how-to tips, scorecards and reimbursement policies linked to the new standards. And there is no shortage of experts eager to explain it all and to remind clinicians to, well, be compassionate.

The enthusiasm reflects excellent intentions, of course. The problem is that when faced with a complicated case that falls outside of the relatively simplistic boundaries of the irreproachable truisms, caregivers are almost always on their own. That professional isolation — and the moral distress that goes with it — has contributed to alarming levels of professional burnout.

But one organization has been working to change that by quietly focusing where others have not: on supporting caregivers in their everyday clinical work.

Inspired by the experiences of Kenneth B. Schwartz, a Boston health care lawyer who died of cancer in 1995 at the age of 40, the Schwartz Center for Compassionate Healthcare has for the last 15 years run a program known simply as Schwartz Rounds. Held on a monthly or bimonthly basis in hospitals, nursing homes, community health centers and academic medical centers across the country, these rounds, or meetings, are an opportunity for clinicians to discuss emotionally challenging cases or issues in their work.

Led by a trained facilitator, the rounds attract up to 200 doctors, nurses, social workers and other caregivers and employees. There is a strict code of confidentiality. Typical topics include cases in which a clinician and patient can no longer communicate effectively because of differing religious views, instances in which a caregiver makes mistakes and situations in which patients or their family members become violent with caregivers.

The discussions that ensue are often emotional. But instead of focusing on blame, discussion leaders work to transform these stressful moments into an opportunity for clinicians from all disciplines to encourage and support one another. “With problems like these, people usually just end up pointing fingers,” said Dr. Stephen Nalbach, a resident in neurosurgery at Brigham and Women’s Hospital in Boston. “Schwartz Rounds is like a conversation where we get to debrief and learn from others and try to do better, instead of just moving on and forgetting.”

While early critics might have been skeptical about the effect of these meetings, a recent study in the journal Academic Medicine has shown that clinicians who attend Schwartz Rounds feel significantly less stress and are better able to cope with the demands of their work. The more frequently they attend rounds, the more easily they discuss sensitive issues with their patients.

What’s more, they feel energized about their work and better equipped to come up with new strategies for handling difficult patient situations. Institutional culture has been shown to improve as well, with about half of all participants citing a greater focus on patient-centered and team-based care at hospitals that hold Schwartz Rounds.

The change even trickles down to the language of the workplace. “At some centers, ‘Schwartz’ has become a verb,” said Julie Rosen, executive director of the Schwartz Center. “To ‘de-Schwartz’ means to lose one’s compassion, and to ‘Schwartz it’ means to add conviction and compassion to a job.”

Offering these rounds requires a significant commitment from both the center and the more than 200 hospitals that currently hold the rounds. The cost for the first year, not including the time and effort of on-site clinicians who must step away from their work to attend or those involved in the planning of each meeting, is approximately $15,000 per institution. The Schwartz Center, which relies primarily on philanthropic sources for its own operations, generally pays a large part of these initial costs, but thereafter each site shoulders most of its own expenses while the center provides ongoing support in the form of evaluations, regular visits and handouts and other materials.

In an essay he published shortly before he died, Mr. Schwartz described the relationships he had with several of his caregivers during his final months of life. Struggling to come to terms with leaving behind a wife and 3-year-old son, he wrote that the “acts of kindness — the simple touch from my caregivers — have made the unbearable bearable.”

“If I have learned anything,” he continued, “it is that we never know when, how or whom a serious illness will strike. If and when it does, each one of us wants not simply the best possible care for our body but for our whole being.”

His legacy has made that possible for all of us, patients and caregivers.