You Can't Handle the Truth?

Writing for the Well Blog on the New York Times, Dr. Pauline Chen has produced numerous essays that I always find very interesting and oddly well-timed.

This particular subject has come up recently in conversations with friends: when doctors are less than totally forthcoming with their patients.  We would know - we are the medical students who silently observe behavior on both sides of the patient's door.  It doesn't escape us when the doctor, by way of explaining a little about the patient's history and current problem, tells us that their tumor is inoperable, and then steps confidently into the examination room that holds the waiting patient, and tells them that "there might be something we can do."  And then, after exiting the room and shutting the door, shakes his head and says to us, "No.  There's no way he is going to make it."

I am not exaggerating at all about that story.  I was the medical student.  My peers and I all have multiple versions of our own, variations on the theme.

Not every doctor does this.  I have observed physicians who truthfully and tactfully lay out everything they know for their patients and allow them to make truly informed decisions.  But plenty of them fudge or obscure the truth.  Maybe some of the difficulty lies in what the "truth" is in medicine... doctors certainly do not know everything, nor can they predict every outcome.  Getting a second opinion is not necessarily  mistrustful or naive.  Then, too, there are surely patients who do not want to hear that their options have run out, just as there are patients who definitely do want to know, for whom a brutally honest prognosis will help them to prepare emotionally, spiritually and otherwise for what lies ahead.

If your doctor really believed there was nothing more he could do for you, would you want to know? 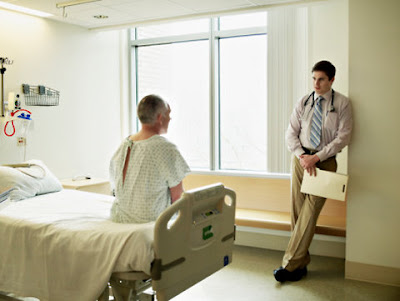 Every spring, a former patient and his elderly parents would drive two hours to the hospital carrying chocolates for the staff — an epicurean celebration of the man’s successful liver transplant a few years earlier. The patient, tall, in his 30s and with sandy-brown hair, handed out the boxes, and his parents, their parched-earth faces beaming with joy, shook everyone’s hands.
But each time the parents came over to me, there seemed to be a moment of hesitation.
On the night of their son’s transplant, I was the doctor who relayed the grim details of their son’s state. As he lay in the intensive care unit waiting for the organ, I described to them his deep coma, his complete dependence on a breathing machine, his blood, which had become as thin as water, and his need for such high doses of an intravenous infusion to support his blood pressure that if we couldn’t do the operation soon, it would be impossible to move him even the few hundred feet to the operating room for a lifesaving transplant.
Because I believed that it was my duty as their son’s doctor to be truthful, I told them that their only child might die.
Fortunately, my dire prediction proved incorrect. And while I never questioned the importance of a doctor’s honesty, every year that couple and their son returned, I wondered again if my devotion to this professional ideal had come at a significant cost: their hope.
According to a study published last month in the journal Health Affairs, I am not the only doctor to have struggled with transparency and honesty.
Researchers from the Mongan Institute for Health Policy at Massachusetts General Hospital in Boston created a survey based on the Charter on Medical Professionalism, a widely accepted code of professional behavior that upholds patient autonomy and the crucial role of physician honesty and transparency. Doctors who took the survey received $20 and were asked about their attitudes and their behaviors in the past year.
While a majority of the nearly 2,000 doctors polled believed that physicians should never lie to patients or fail to inform them of the risks and benefits of a procedure or treatment, a large number also revealed that they had not been completely honest or transparent over the past year. More than half had described a patient’s prognosis more optimistically than warranted. More than 10 percent had said something untrue. And even though almost all the doctors said that they believed confidential health information should be disclosed only with authorization, more than two-thirds had revealed private health information to others without the patient’s explicit permission.
“These results reveal a breakdown in communication that makes patient-centered care much more difficult,” said Eric G. Campbell, senior author of the study and an associate professor of medicine at Harvard Medical School, who directs research at the Mongan Institute.
The researchers were not able to assess why some doctors might have been compelled to veil or avoid the truth, but “I don’t believe doctors set out to be dishonest or have some kind of malicious or nefarious intent,” said Dr. Lisa I. Iezzoni, the study’s lead author and a professor of medicine at Harvard Medical School, who is director of the Mongan Institute. Dr. Iezzoni noted that some doctors might have worried that talking about a topic like weight loss could offend an overweight patient and even backfire. She added that others might have glossed over a terminal diagnosis, fearing that the patient and family members would never recover from a frank discussion of such devastating news.
But however well-intentioned these assumptions about how patients will react are, they are also often incorrect. Studies have shown that even in the gravest of circumstances, patients prefer accurate and honest information. Patients with a terminal diagnosis, for example, may be grateful to have the chance to put their personal affairs in order before it’s too late. “Patients need the truth so they can best make decisions for themselves,” Dr. Iezzoni noted.
The best approach, for both doctors and patients, may be to discuss preferences about communicating before difficult medical issues arise. “Patients need to sit back and think about how they’d like to learn about something related to their health,” Dr. Iezzoni said. These preliminary discussions are especially important for patients who may not want or be able to tolerate full disclosure, as in the case of children who are ill, individuals with progressive conditions like Alzheimer’s or Lou Gehrig’s disease, or those who come from cultures in which it may be acceptable to disclose a terminal or difficult diagnosis to the family but not to the patient.
Despite what some might consider dispiriting findings, the researchers remain optimistic about ways to improve communication and the future of the patient-doctor relationship. “I see patient-centered care as a work in progress,” Dr. Iezzoni said. That work includes teaching young doctors better communication skills, establishing reimbursement systems that allow time for conversations and recognizing just how challenging honesty and transparency can sometimes be.
The last time I saw the parents of my former patient, I finally summoned up the courage to revisit our conversation on the night of his transplant. I apologized for having been perhaps too honest.
As I spoke, I saw the parents’ smiles disappear, and once again I sensed that painful moment of hesitation.
Then the patient’s mother stepped forward and clasped my right hand. “That was a terrible time,” she said. “But,” she added, looking at her son, “what if things had turned out differently and we hadn’t even known?”