Let's talk about the reason - the only reason - I have not gained 50 pounds so far during med school.  Actually, over the past more-than-a-year, I am down a pound and a few inches all over.

I am not, and have never been, one of those people who lose weight when I get all stressed out and busy.  I do the opposite.  (I try not to intensely dislike people who do that, but it's really hard not to.)

There are approximately 10,582 different "boot camp" companies in Atlanta.  If you ever stroll by Piedmont Park around 5:30 pm on any weekday, you know what I'm talking about.  The place is swarming with clumps of people in brightly-colored workout clothes, representing all different fitness levels, sweating and slogging through pushups and lunges and other ridiculous-looking exercises.  I have tried one or two of them.  But FitWit is different.

I started going for the first time about a year and a half ago, when a good friend confessed, almost embarrassed, that she had been doing this boot-camp-thing.  Embarrassed by what, now, I am really not sure.  She has always been an athlete and looked amazing, but she said that her weeks working out with these people had gotten her in the best shape of her life.  She invited me to the next camp.

At the time, I was about five months into my first year, and going through an upswing in my weight, the kind that has come at regular intervals for as long as I can remember, just as regular and dependable as Seinfeld reruns, or taxes, or football season.   Anyway, I was feeling really bad about it, and, lured yet again by the promise (made up in my head) of some sort of "6 Weeks to a Better Body/Total Fitness/The Best You've Ever Looked Naked" totally nonsensical and unrealistic idea, I didn't hesitate a nanosecond to agree to go.  (Wow.  Did I really just put that on the internet??)

Obviously, that first 6-week camp did not totally change me or make me into a fitness superstar.  Actually, I got really busy and didn't do another camp until about a year ago.  Since then, with a few off-months and weeks, I have been a FitWit regular, and now I literally can't imagine working out any other way.  I also credit the FitWit team for saving me not only from obesity but craziness... I really go just as much for my mental health and sanity as for anything else.

Anyway, this is not an ad for FitWit (although if they want to pay to promote them, I will!!) but I said that it is different, and here is why: it is actually the for-profit supporting branch of a nonprofit organization that helps provide fitness programs to kids and teens in underserved Metro Atlanta public schools.  Check them out here: FitWit Foundation.  Awesome stuff.

We do all the same ridiculous-looking exercises that all the other bootcamps do.  But the other big thing that makes FitWit different is that they intentionally emphasize community in their camps.  I think it really works - at least half the reason I keep going back, and the reason I will never leave, is that I have been working out with largely the same group of people for a year now, and I love the feeling of being part of a little community group.  We have suffered and sweated and fallen on our butts and laughed and learned and eaten chips and salsa and thrown back margaritas together, and you know what?  It boils down to this: it is just so much more fun to go work out with your buddies than alone or with a bunch of strangers.

Yesterday afternoon, the last patient I saw in clinic has a BMI of over 50 (I don't remember the exact numbers, but she is somewhere around 5'6" and 450 pounds.)  This is after losing 90 pounds following gastric bypass in December.  She is only 24 and has a young daughter.  At that size, she is severely impaired in her daily life.  And here's the thing- she is so nice and fun and lively and funny.  The whole time I spent with her, I kept thinking two things; one, that I would totally want to be friends with this person.  And two, that I could not believe how positive and upbeat she was despite multiple major health issues, not to mention the challenges of just having to navigate life with that much extra weight.  I can get down if I gain weight in the single digits; sometimes I can feel unattractive or self-conscious at my healthy-range BMI.  It was a reality-check.  I can't imagine myself dealing with circumstances like hers half as gracefully; it made me feel pretty humbled.

I went straight from work to boot camp, where I busted my ass, just because I could.  This might be a minor but definitely not insignificant benefit from working in medicine - I often come home at night feeling so grateful for my health and my abilities.

My arms are not slender, nor are they super-defined.  But they can do some good push-ups.  Lots of them, actually.  I may not love the size of my thighs every day, but they can run fast and far, they can jump and climb and squat and push.  Boot camp - it is hard.  I don't always (or even usually) feel like going.  But every single day that I do, I recognized how blessed I am to be able to do it at all.  It makes me even more appreciative of being alive.


My family can be hilariously competitive, which probably comes as a shock to very few of you.

We have been trying to get my dad on a regular diet and exercise routine for a while now, and inspired by a few different things (including my week on palliative care, seeing way too many 60-year-olds at the ends of their lives), we decided to try a new tactic.  A family fitness competition! Yeah, that's right. The Great McDermott Fitness Competition (or GMFC), to be exact.  The competition involves getting credit for workouts and nutrition and reaching fitness goals, and we are all ponying up for it.  We even have an awesome spreadsheet in a shared Google Doc where we keep track of everything (and because I am a huge nerd, I added boxes with formulas that automatically calculate your BMI when you enter your current weight.) 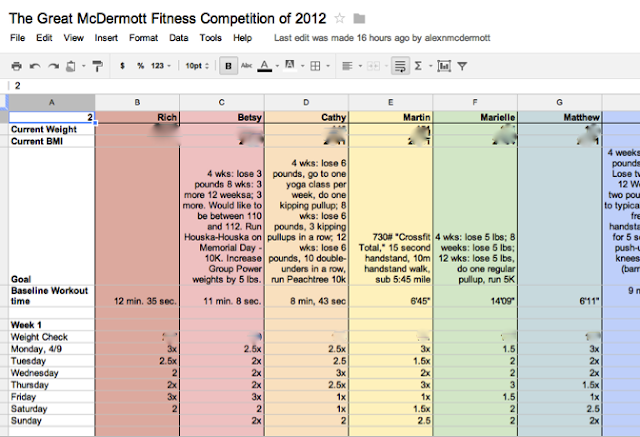 In full disclosure, the timing of this particular post is partially because I sorta fell - hard - off the bandwagon last week and am in need of a small fire lit under my butt again.  So now that I am being all public about this, keep me accountable!  And for those of you who read this and know my dad - if you run into the good reverend, ask him how his workouts are going.  :)  I might even have some before and after pictures for you in a couple of months (Ha! As long as the after pictures look better, obviously!!)

P.S. My 30 Before 30 list?  My best friend from home suggested that I go a month without spending any money at Target.  I read her text and my very first thought was, "Um, no, I don't think that's even remotely possible."  Haha... yikes.  But I added it to the list and I'm gonna try!  I mean, it's already the 3rd and I haven't spent any money there this month yet!  (I really wish I were kidding about this...)  I was just in there on Sunday, actually, looking at a nice big, wide glass vase and thinking it would make a very pretty new home for Lucy and Ethel, whose fish tank has gotten to be less than ideal, poor things.  I uncharacteristically decided against buying it on the spot and thought I would just wait until anther weekend in the very near future.  Siiigh...

This might actually be one of the hardest things I have on that list.  (Again, really wish I were kidding, but I am definitely not, especially given the fact that I am about to move directly behind a Target in about two weeks...)