The patient was eclamptic, postictal and post stat c-section, intubated and sedated.

Still a teenager, summer school cut short before it had even begun with the emergency early arrival of her first baby.

My job?  To watch her and go running for help in case she seized again.

I literally sat and watched her for hours.  Not exactly the obstetrical urgent care experience I had expected.  A glitch in the ob residents' schedules that night, and I was all but forgotten about back in this darkened room.  The patient's nurse on the short-staffed intensive care unit was grateful for my help all night, though.  She actually refused to let me leave, kept asking me to stay, giving me tasks.

You're not leaving me now, right? she kept repeating.  She even told me she was going to make one of her famous New York-style cheesecakes as a thank-you gift, to keep all to myself.  The residents will be mad, they'll be so jealous, she said.  Everyone knows how good my cheesecake is, she said, chuckling and nodding.  I helped her shift the patient in the bed, change the bedroll, draw labs.

I sat with this patient and watched as people came and went.  Just sitting there, mostly; observing.  Her mother.  Her high school friends.  Her father.  Her baby's daddy was a baby himself.  I watched as his punk 17-year-old cool-guy posturing melted away and he broke down, weeping as he leaned on the patient's bedrails, overcome.  His mother was there.  Friends and relatives came and stood by her sedated form, watching the timed rise and fall of the ventilator.  They took turns visiting the baby in the NICU.

I watched nurses, residents, attendings all come and go.  Asking about the patient's stats to no one in particular, murmuring and conferring amongst themselves, checking monitors for pressures, leaving again without much word to those of us hanging out in the room.  I knew how she was doing in general, how her pressures had been acting, what had been done, what hadn't been done, why we were waiting for neuro, that the Fentanyl drip still hadn't come, despite having been ordered hours ago.  No one asked me.

The nurse came and told me, we're taking a road trip.  You're coming with me, right?  Don't go anywhere, I want you coming when we have to take this road trip, she said.  Don't worry, I'm not going anywhere, I told her.  I'll be here to help.

The patient needed to be brought to another floor for a CT of her head, to rule out bleeding, other causes for her seizures.  The nurse, the respiratory therapist and I all helped to get her ready.  IV bags hung on the bed, monitors switched over to portable machines.  We got the ok; bring her on down, they said.  I was too naive to be very worried.  But the nurse kept shaking her head, exhaling through pursed lips.  Whoooee, I hate road trips.  Oou!  They make me nervous.  I haven't had to do a road trip in two years, she said.  The respiratory therapist was tight-lipped and serious as we swung the bed down halls and around corners, into elevators and through doors.

We arrived at CT and maneuvered the bed into the room.  We were working on getting the patient into position for transfer onto the machine when a voice came over a speaker.

We kept working.  The voice asked again.  Doctor?  Excuse me, doctor?  The nurse and the therapist stopped and looked up, expectantly.  I looked around.  There was no one else in the room.  I looked back down at all the lines I was untangling.

Doctor?  Are you the doctor?  The voice asked again.

And suddenly I caught sight of myself in the tinted window that separated us from the technician's room.  Holy shit, my white coat.  The voice is talking to me!  He thinks I'm the doctor!  Dear God.  I shook my head furiously as I rushed to set him straight, feeling a hot flush in my face.

I guess it wasn't the first time someone had asked me if I was the doctor while I was wearing my white coat.  But it was the most off-guard the question has ever caught me.  A tinted pane of reflective glass in between us, and without seeing the questioner's face, it didn't even cross my mind that I was the person being presumed the doctor.  It's gonna take some getting used to, which is a good thing, since I am nowhere near being one yet, and to tell the truth, I probably feel even further from it than I actually am.  In this case, it was an especially odd and hilarious juxtaposition between the role I had played all day in this patient's care and this man's assumption in the CT room, and once I recovered from my initial, flustered, red-faced panic, I had to laugh.

The nurse winked and laughed along with me.

Summer evening in our hammock, joined by two furry friends: 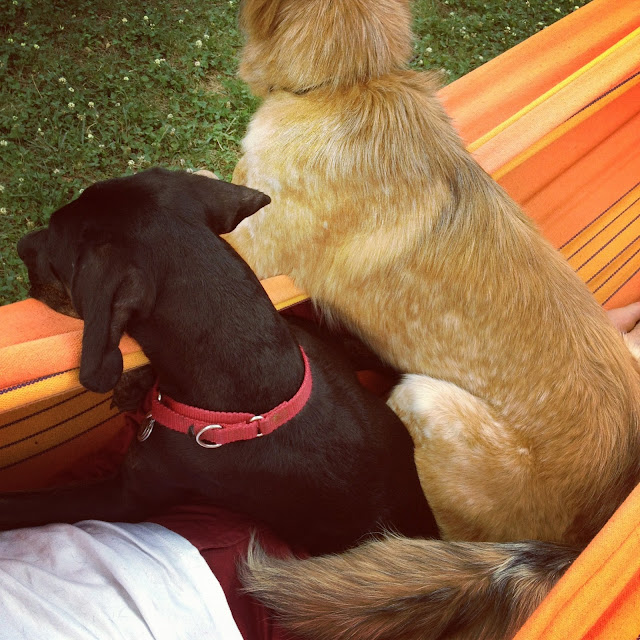