My blogging frequency has taken a severe nosedive as of late - not my favorite.  My apologies to those of you who actually come here for new posts.  I really miss writing, but I feel like the world's most boring and exhausted human these days, which doesn't exactly lend itself to good creative output.  I blame surgery.

The weather here in Atlanta has suddenly gotten, like, legitimately cold.  Just in time for our heat to decide to stop working, pretty much at the exact moment the temperatures swooped below 60 for the first time and stayed there.  The lack of a heated house is also not my favorite, but the chilly weather does bring some perks, and since I have not been feeling too terribly excessively happy recently, I wanted to do a quick post about some little things that make me happy.  I was gonna do a Top Ten list, but I am not sure that I have ten things in me tonight.  We shall see, shall we?


1.  Hands-down, the best thing about the cold weather and freezing house?  Izzy's snuggle-factor goes up exponentially. 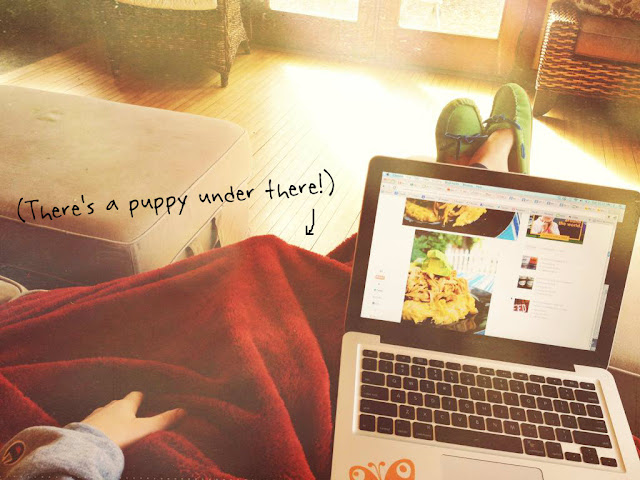 Her favorite thing is to curl up next to someone (or on top of someone, if possible), and preferably under a warm blanket at the same time.  I think she gets really cold because she is so skinny and short-haired, so she has no extra insulation at all.  She used to sleep on the couch at night, but since it's been cold, she has started sleeping with me again, like she did when she was a puppy.  When I go to bed for the night, she stands next to my bed and waits for me to invite her up.  I hold up an edge of my comforter, and she jumps up, diving underneath the covers and then turns around a couple of times before flopping down ascloseaspossible to me and resting her head on my legs or my stomach or my back.  It's the cutest thing ever.  It's also awesome for me because I would also otherwise be freezing, too.  And if I accidentally hog the covers in the middle of the night and leave her out in the cold, she wakes me up by grunting or whining a little bit and moving around until I throw the blanket back on top of her.  Sort of hilarious.

2. Speaking of snuggly things, the cold weather has also brought out blankets, sweaters, and fuzzy slippers.  It's impossible not to be at least a little cheered by warm, soft, fuzzy things, don't you think?

3. The cold snap also means it's the perfect season for lots of soup and hot tea and other delicious warm things to eat.  It's been a while since I've made some good soup, so that is on the docket for this week (can you tell I have been cold??)  My plan is to cook up a bunch of different stuff to freeze so that I have it on hand for quick, easy meals during my next month of general surgery, since by all accounts, being on plastics, I ain't seen nothin' yet.

4. Speaking of soup, I never really got around to writing about it, but a couple of months ago I did this thing called the Whole30 challenge, which is basically a super-strict version of the Paleo diet for thirty days (no grains, no dairy, no legumes, no sugar, no alcohol).  I successfully completed the thirty days, which made me more proud and impressed with myself than anything else.  At the time, I didn't really feel like it was life-changing, or anything; it was a lot of work, it cost a lot more at the grocery store, it took a lot of time in the kitchen... I literally felt I like the only three things I did all month were go to work, go to boot camp, and prepare food.  There were times when it was really hard, especially at social events.  There is like, nothing you can eat at a restaurant.  And I hate to say it, but the no-alcohol thing was the hardest part by far (and y'all, that is really saying something - I was drinking my coffee black!!)

I didn't really feel like I noticed a huge difference while I was doing it.  But over the month I did start to notice that I just felt good.  I liked it.  Towards the end of the month, I also started noticing that I felt better and stronger during my workouts.  When I really noticed the difference, though, was when the thirty days were over and I  went to a big party and went wild with all the delicious food-things there that I had not been able to eat for the preceding 30 days -  Cheese!  Grains!  Legumes!  Alcohol!  SUGAR!!  And I felt awful the next day.  Like seriously hungover, but from food.  Over the course of the month, I also lost about five pounds and had a few people were comment that I looked different.  Not a lot different, but noticeably so.

So I sort of took all those lessons about this new way of eating and decided that I wanted to keep eating that way most of the time, just not be quite so strict about it.  But then, in a creeping, insidious way, it became first one thing and then another thing and then all of a sudden I was grabbing CliffBars for breakfast again and then it was Halloween candy and then last week I made chocolate cookies TWICE and bought a bag of Peppermint Hugs.

And now, seemingly all of a sudden, it has actually been - dare I say it? - weeks since I have been grocery shopping for fresh produce.  And guess what?  Surprise, surprise... I just feel crappy.  Really, really crappy.  Physically, mentally, and emotionally.  I hardly think it's coincidence.  Plus those stupid five pounds are back, which sucks.  When it comes to food, I think I just do better when I have clear guidelines and am not left to my own devices to "moderate".  Anyway, I'm jumping back on this Paleo bandwagon.  I'm sick of feeling crappy.

5. I go back to Haiti one week from today!!  So excited.  So surreal that it's coming up so soon.  (Note to self: remember to fill/take your chloroquine tonight.) 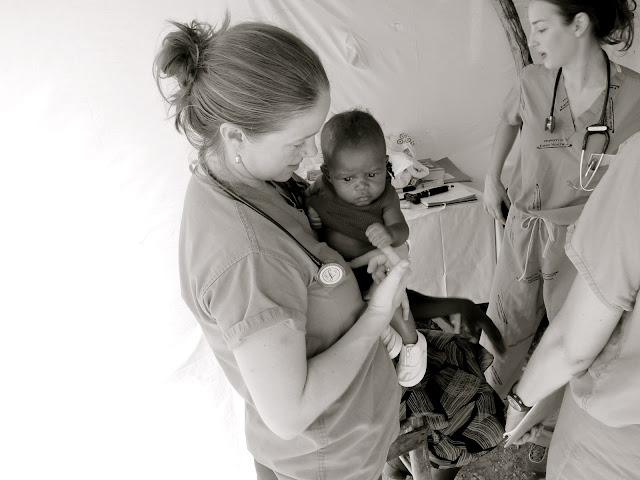 Okee dokee... evidently I only have six things to talk about tonight, so there you have them.  (Sunday Six?  Maybe I'll make it a thing...)  Happy Sunday night, friends!